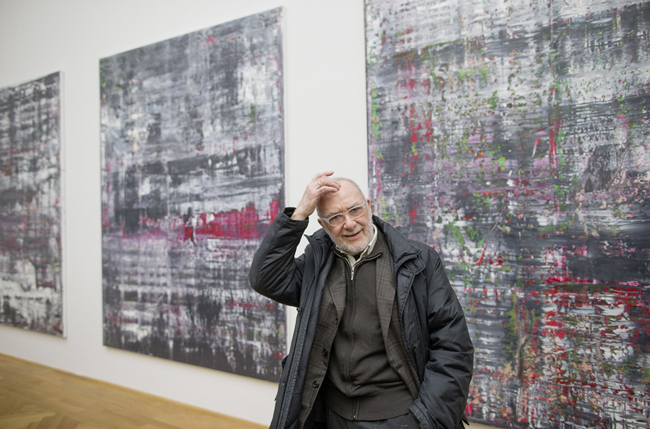 Richter has produced abstract as well as photorealistic paintings, and also photographs and glass pieces. His art follows the examples of Picasso and Jean Arp in undermining the concept of the artist's obligation to maintain a single cohesive style.

In October 2012, Richter's Abstraktes Bild set an auction record price for a painting by a living artist at $34 million (£21 million).

This was further exceeded in February 2015 when his painting Abstraktes Bild sold for $44.52 million (£30.4 million) in London at Sotheby's Contemporary Evening Sale.

Nearly all of Richter's work demonstrates both illusionistic space that seems natural and the physical activity and material of painting—as mutual interferences.

For Richter, reality is the combination of new attempts to understand—to represent; in his case, to paint—the world surrounding us.

Richter's opinions and perspectives on his own art, and that of the larger art market and various artistic movements, are compiled in a chronological record of "Writings" and interviews.

The following quotes are excerpts from the compilation:

Position on the art market

Following an exhibition with Blinky Palermo at Galerie Heiner Friedrich in 1971, Richter's formal arrangement with the dealer came to an end in 1972.

Thereafter Friedrich was only entitled to sell the paintings that he had already obtained contractually from Richter. In the following years, Richter showed with Galerie Konrad Fischer, Düsseldorf, and Sperone Westwater, New York.

Today Richter is represented by Marian Goodman,his primary dealer since 1985.

Today, museums own roughly 38% of Richter's works, including half of his large abstract paintings.

At the same time, his works often appear at auction.

According to artnet, an online firm that tracks the art market, $76.9 million worth of Richter's work was sold at auction in 2010.

Richter's high turnover volume reflects his prolificacy as well as his popularity.

15 of them had sold for more than $10,000,000 between 2007 and 2012.Richter's paintings have been flowing steadily out of Germany since the mid-1990s even as certain important German collectors – Frieder Burda, Josef Fröhlich, Georg Böckmann, and Ulrich Ströher – have held on to theirs.

In 2010, the Weserburg modern art museum in Bremen, Germany, decided to sell Richter's 1966 painting Matrosen (Sailors) in a November auction held by Sotheby's, where John D. Arnoldbought it for $13 million.

Vierwaldstätter See, the largest of a distinct series of four views of Lake Lucerne painted by Richter in 1969, sold for £15.8 million ($24 million) at Christie's London in 2015.

Another coveted group of works is the Abstrakte Bilder series, particularly those made after 1988, which are finished with a large squeegee rather than a brush or roller.

In November 2011, Sotheby's sold a group of colorful abstract canvases by Richter, including Abstraktes Bild 849-3, which made a record price for the artist at auction when Lily Safrapaid $20.8 million only to donate it to the Israel Museum afterwards.

Abstraktes Bild (809-4), one of the artist's abstract canvases from 1994, was sold by Eric Clapton at Sotheby's to a telephone bidder for $34.2 million in late 2012. (It had been estimated to bring $14.1 million to $18.8 million.)When asked about amounts like that Richter said "It's just as absurd as the banking crisis.

It's impossible to understand and it's daft!"